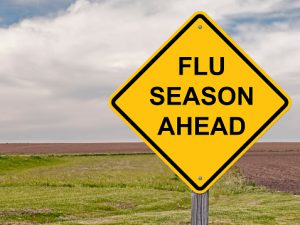 Influenza – the unwelcome guest that comes calling on us every year – often with many very unpleasant consequences. Historically, widespread flu epidemics have had devastating effects on large portions of the earth’s population. It wasn’t until the 1930’s that two scientists, Dr. Jonas Salk and Dr. Thomas Francis developed the first vaccine to prevent the flu virus. The vaccine was given to American soldiers during World War II and was found to be useful in preventing the widespread outbreaks that had been common before the vaccines were used. In the years after the war, the vaccine was made available to the general public and has greatly reduced the widespread epidemics that were so common before. Research has helped to develop better vaccines with fewer side effects and also better suited to combat strains of the influenza virus that keep changing every year. Over the past 60 years millions of people have been given the flu vaccine each year. There is still a debate going on as to whether the flu vaccine is safe. Many people still are hesitant about getting the vaccine at all. The flu still comes calling every year, and many people are still being affected. However there are much fewer catastrophic epidemics throughout the world, and symptoms appear to be lessened, thanks in large part to the work done by Dr Salk and Dr. Francis in the early part of the last century.