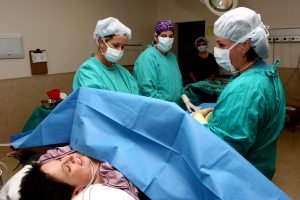 In the field of obstetrics and gynecology, there is no more debatable topic than the increased rate of cesarean (C-section) deliveries. The C-section rate is the percentage of all births that take place surgically, whereby a baby is delivered via an incision on the abdomen. Over the last few decades, this rate has increased tremendously. Up to the 1970’s, the rate of cesarean in the U.S. was less than 5% but in the subsequent few years, it climbed to 33%.

While the cesarean delivery has become a safer operation than it used to be, it is still a major abdominal surgery which should be avoided when a vaginal delivery is an option for both baby and mother. Sadly, rates of complications such as cerebral palsy have not decreased much despite the 600% increase of cesarean deliveries in the last three decades. So why then, has the cesarean rate climbed so much?

There are several factors explaining the increase the cesarean rates and there is no single answer. because so much has changed in the last two of three decades, in terms of medical, social and legal aspects. Let’s look at a few factors:

The WHO (World Health Organization) has been advocating since 1985 to reduce the C-section to10-15 percent since 1985. Here are some tips for women who want to achieve this goal and reduce their chances of having a C-section.